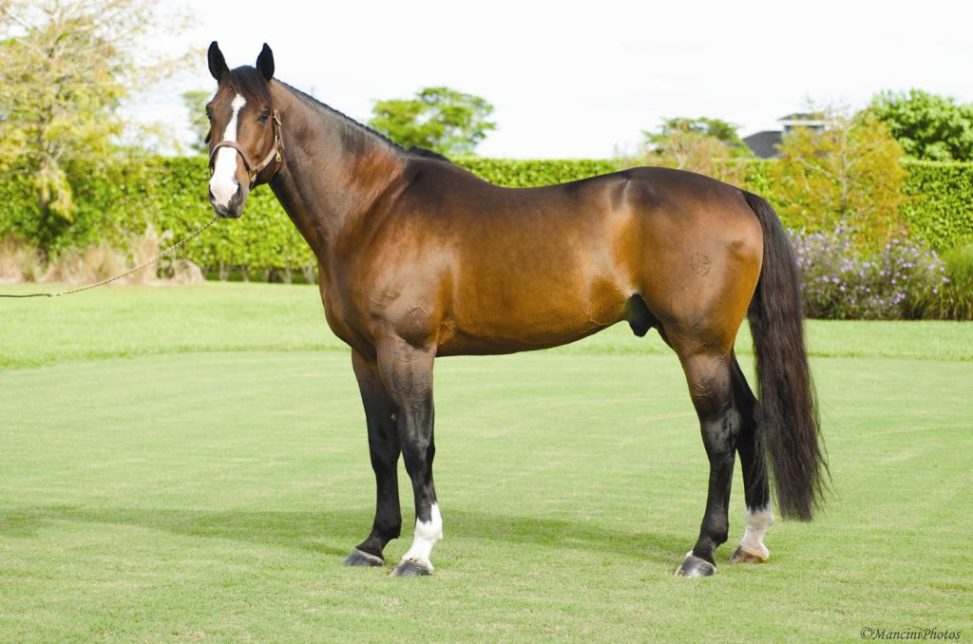 Amaretto D’Arco is, quite simply, bred to excel. The synergy of the very best Belgian and French blood in his pedigree sets him apart, in the competition ring and as a breeding stallion. His solid mind, gentlemanly temperament and willingness allowed him to successfully debut at the Grand Prix level in Europe at just 7 years of age. And at the age of 9, his raw power, carefulness and natural talent have catapulted him among the elite show jumpers in the world.

His sire, the celebrated Darco, needs no introduction. Darco was not only one of the greatest show jumping stallions to compete, but he has also been the World Breeding Federation’s top ranked jump progenitor in the world for the past three years. Amaretto D’Arcos’s dam-sire, the international competitor, Tenor Manciais, fused the three most influential Selle Francais sires lines into a single pedigree: Grand Veneur, Nankin and Ibrahim. Amaretto D’Arco is the ultimate blend of pedigree and performance.

A true reflection of his sire in every respect, there is no question as to why Amaretto D’Arco was hand selected by Spy Coast Farm’s head trainer and rider, Shane Sweetnam, to become the farm’s flagship competitor. In the past 18 months, as his experience has grown and his partnership with his rider has developed, Amaretto D’Arco has risen to meet these expectations. He has competed successfully in Europe and the United States, in Nations Cup and World Cup classes and is slated to be Shane’s mount for the 2010 World Equestrian Games.

Following in his sire’s footsteps, Amaretto D’Arco is the logical choice for the serious jumper breeder.

Sire Darco’s list of achievements as a jumping stallion is testimony to a stellar career. Partnered with Ludo Phillippaerts since the age of 5, highlights of the duo’s success included 7th place at the Barcelona Olympics, 2nd at Spruce Meadows/Calgary, 6th in the World Equestrian Games and Stockholm, and countless wins and placings at World Cup and international Grand Prixs. As a competitor, Darco displayed a lot of power and stamina and was described by his rider as an extremely honest, intelligent and careful partner with a solid character. As a sire, Darco reliably passes on these characteristics to his progeny. Ranked at the top of the World Breeding Federation’s Jumping Sire list in 2007, 2008 and again in 2009, many of Darco’s offspring have become household names by virtue of their success in the ring: Parco, Sapphire, King Darco, Otterongo, Nonstop, Ublesco, Winningmood, etc. In all, Darco has sired more than 3,000 foals. By virtue of his prepotency as a sire, his impact on the show jumping world will be felt for years to come.

Amaretto D’Arco’s dam, Tatouage D’Avontuur, is half-sister to the approved stallions and international show jumpers, Sauveur De La Cour and Whataboy Ter Lindenn. In addition to Amaretto, D’Arco, she has produced the recently approved stallion Forever D’Arco. Forever D’Arco was a finalist at the Belgian Championship for 4-Year Olds.

His dam-sire, Tenor Manciais, combines in his pedigree the three best stallion lines of the Selle Francais breed, namely the Grand Veneur line, the Nankin line and the Ibrahim line. Tenor’s dam, Golden Comet, is also the dam of the approved stallions Rêve Mançiais, Vicomte Mançiais and the international performer Prince Mançiais.

Tenor Manciais was a finalist in the Belgian Championship for Young Horses at 4, 5 and 6 years old. At the age of 7 he was international successful at Cortina and Deauville, the vice-champion of Belgium in 1993 and then was an international performer with Phillippe Lejeune.

Amaretto d’Arco sired two foals in Europe for his former rider before leaving for the US in 2008. His first North American foals will arrive in 2010 from:

Amaretto D’Arco is most suitable for a blood-type mare that requires bone, substance and additional power and scope. He will be an excellent cross on Thoroughbred mares.