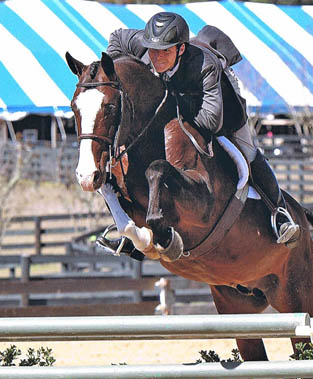 Balta’Czar is a modern, well-rounded stallion who has immense talent for jumping and is gifted with superior gaits. Balta’Czar is truly a prepotent stallion (meaning that his physiological characteristics are consistent and overwhelmingly reflected in his foals) who passes on his kind, willing and unflappable temperament to his foals. Sire of countless premium foals, Balta’Czar shines in the breeding shed. He has produced:

Jete, Balta’Czar’s Holsteiner dam, is one of few great breeding mares in the United States. She is the dam of three approved stallions and 100% premium foals (9 in all, thus far). Jete brings two crosses (3S X 3D) to the stallion who revolutionized the entire Holsteiner breed: Cor de la Bryere

Balta’Czar’s sire is Alla’Czar, the #1 hunter sire in the US. He is by the great Zeus, sire of many international jumping stars such as Midnight Madness (M. Whitaker), Zander Z (J. Lansink), Swift and VDL Marlon; as a the dam’s sire in Tinka’s Boy (M. Fuchs) and Guidam Sohn (J. Lansink) to name a few.

Earning his life-time approval through sport, Balta’Czar shines in many venues:

Balta’Czar can always be counted on to improve the mare to which he is bred. In the breeding world, there are very few Improvement Sires; Balta’Czar is one of them.

Balta’Czar is a modern stallion with correct conformation, an extremely strong topline and near perfect coupling. He consistently corrects many common flaws breeders are looking to improve: raising the neck connection while lowering the withers, shortening/strengthening back and loin connection, adding substance, adding elasticity and suppleness to movement, and giving his foals his generous, calm dispositions. He is a superior choice for the Thoroughbred mare. Balta’Czar also crosses well w/heavier warmblood mares, lightening them to make more modern sporthorses.