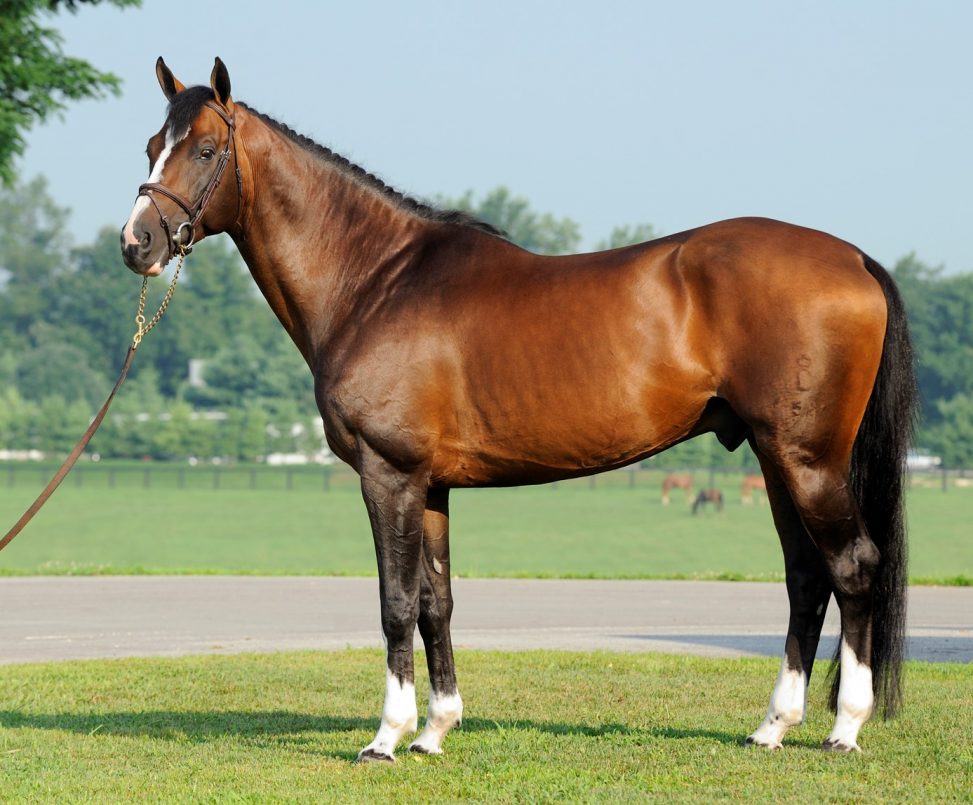 Bred by Paul Schockemohle’s Lewitz Stud, SCF Renaissance has put on display this top performance lineage by successfully competing in his young career in both Europe and the United States and debuting in his fist Grand Prix at just 9 years old. Imported by Spy Coast Farm in 2010, he was selected by owner Lisa Lourie and trainer Shane Sweetnam not only to be the farm’s next Grand Prix competitor, but also to be the perfect compliment to the farm’s burgeoning stallion line-up.

As his very modern blood type would suggest, Renaissance possesses cat-like athleticism which will be a unique advantage for those breeders who need to add blood and refinement, but not lose generations of Warmblood breeding. And while his near perfect jumping technique, limitless scope and carefulness make him a natural choice for any jumper breeder, his exquisite bascule, his “knees to chin jump” and his fancy exterior will most certainly entice the hunter breeder.

SCF Renaissance: An all-too-tempting choice for the breeder seeking an all-star pedigree and the jump to match it.

Bred by the Zangersheide Stud, Lux Z is one of the most successful stallions in international show jumping. With Jerry Smit, Lux Z participated in the 2000 Sydney Olympics and won the Pulsar Crown competitions in Valkenswaard and Cannes. His total winnings exceeded one million Euro!

His breeding production equals his performance record. From his first foal crop in the Netherlands, no less than six sons were approved. And from his first foal crop in Holstein, three international show jumpers emerged: Gazelle d ‘Aubry, Lux Can Do It and Lagunas. According to Patricia Nicholson, the world famous Irish breeder who almost single handedly provided Olympian Bruce Davidson all of his mounts:

“Lux Z is guaranteed to improve the breeding potential of all mares with his impeccable pedigree, super performance record and his consistency in producing stunning athletic foals. He should be extensively used by Irish breeders.”

In addition to stamping his offspring with jumping ability, Lux Z also anchors his type and movements in his offspring and has produced numerous high level dressage competitors.

Lux Z is said to be the best son of the Holsteiner stallion Lord Calando. Lord Calando’s sire, Lord, needs little introduction as one of the foundation sires of the Holsteiner breed, but his dam, Perra is very special as she is also the dam of the lauded Holsteiner stallion Carthago Z, who was another of the great jumping competitors and sires. Perra’s sire, Calando was also an international show jumper and competed in the 1984 Olympic Games with Karsten Huck and is best known as a broodmare sire with over 180 States Premium Mares.

Dam-sire, Silvio I, is the most important son of the influential Schockemohle stallion, Sandro Z. He is a Thoroughbred-type stallion that has been used extensively in Hanoverian and Oldenburg jumper breeding programs. He was an active international show jumper under Franke Sloothaak. As a sire, Silvio I stamps his offspring with his type and his exceptional jumping ability. His most famous offspring is Shutterfly, who has won over three million euro in prize money, the World Cup final three times (2005, 2008, 2009), a bronze medal at the World Equestrian Games in 2006, the European Championship in 2007 and was the highest placed German show jumping horse at the Olympic Games in Hong Kong, where he came fourth. Shutterfly’s full-brother, Sir Shutterfly, now stands at Paul Schockemhole’s stud farm. Other accomplished Silvio offspring include:

SCF Renaissance has been exclusively a competition horse. This will be his first year standing to the public. Due to his heavy competition schedule, he will have a limited book.

SCF Renaissance is a very modern, blood type stallion with a strong topline and excellent length of leg. He is a medium-sized stallion with respect to height, substance and bone. Due to the prepotency of his pedigree, we expect him to pass on these physical qualities to his offspring, as well as his scope, athleticism and the strong quality of his gaits.

He is strongly recommended for:

We do not expect Renaissance to add significantly (or perhaps at all) to height, mass or bone.